My experience at the University of Techology, Sydney 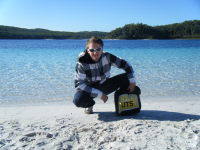 Fraser Island, Lake McKenzie, Hannes Meyer
I am a student of Industrial Mathematics at the University of Bremen. I started studying in Bremen in 2006 and went for one semester abroad to Sydney in 2009. There are many universities in Australia with an high education standard but in the end I decided to take a term at the University of Technology Sydney (UTS). They have a really good presentation of there school system in the internet, I think. Their research section is also described there and it seamed to be interesting for me.

The semester times in Australia vary from our times here in Bremen. For this reason, I had my last exam here on a friday and my first day of orientation at the UTS on the following monday. Of course it is stressful to take the long journey and plan everything from a visa to the university enrolement but it was so worth doing that!
I toke subjects in both, mathematics and computer science. In the beginning I had minor language problems but there were a lot of people from Europe and elsewhere with the same issues. In fact of that, making friends was easy and learning to speak the english language without thinking about it, came along in time. Some interesting group projects in my computer science subject, took my knowledge about working in a team to an even more academical level, I believe.

Apart from working on assignments, the UTS offers a lot of communities for sports or social activities. The best of them, I was joining, is the Outdoor Adventure Club. They offer all kind of fun outdoor activities and they try hard on getting every member involved, as often as possible. I started sport climbing with them and it was great. You would start there in a save indoor environment to raise your skills. Once you are ready, you are allowed to join outdoor sports climbing. At least that was my way of doing it. I think, I do not have to mention it but climbing in Australia outdoors is just amazing! Two of my favourites: Palm Beach (Sydney) and Kangeroo Point Cliffs (Brisbane). 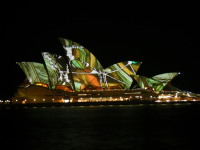 Sydney Smart Light Festival 2009
In my lecture free times, I tried to discover Australia. I can just say, it is so beautiful where ever I have been and I have not even seen the red desert or Tasmania or the west coast. But being on the other side of the world helped me in both ways, academical and personal.
This text got to be in English from my point of view, because the whole experience was mostly in English. I have met a lot of nice German speaking people there as well and speaking German in between was just  same same but different...