Minimal Identification and Modelling of the Dynamics of Industrial Robots 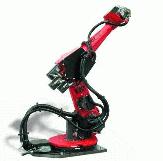 Its many years of experience as a supplier of robot controls means that SEF Roboter GmbH now provides complete robot systems for the automation industry. The six-axis robots with articulated arm which they have developed themselves undertake standard tasks such as welding, screwing, bonding, soldering and cutting. Handling applications on diecasting and injection moulding machines can be carried out quickly and economically. 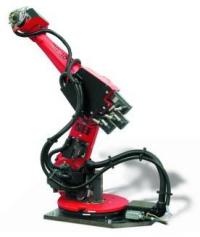 The SR 30, an industrial six-arm articulated robot (Photo: SEF GmbH)
Their spot repetitive accuracy of ±0.1mm means that, even without additional sensorics, the robots are inexpensive to use as a standard solution as well as for fast robot movements and similar more complex tasks. Robot paths can already be designed from the kinematics of an industrial robot which describe its geometry. For optimal control, which takes the robot to its limits, if necessary, the modelling has to take into account the dynamic behaviour on which, for example, inertia, torsion and friction forces have an effect, however. An exact dynamic description of the robot allows one to determine minimum energy paths, for example, or to reduce the wear and tear in the joints.

Even though exact CAD models of new robots are produced during the design phase, said models being able to be used to ascertain the characteristics of the dynamic model, in practice industrial robots often exhibit a dynamic behaviour which deviates from this. Even robots of identical construction can demonstrate different system parameters.

The scope of the cooperation project will therefore include the development of a method to quickly and reliably identify robot model parameters. In order to continue to meet the real-time requirements when designing the path, the model will, at the same time, be reduced to the minimum complexity which is necessary. The dynamic behaviour will thus be modelled only in the relevant areas and parameters will be deleted if not taking them into consideration would not cause a behaviour which is different to the actual behaviour. 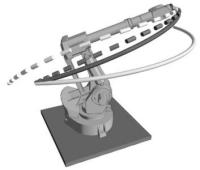 Desired paths for an industrial robot, computed in realtime.
To achieve the desired control accuracy, measurement data is recorded every 5ms. This leads to the order of 5000 records for a typical motion sequence, which are processed further. At present, with less than 10% of this data one requires a computer time of around 1h. One frequently obtains local minima which do not fulfil the optimisation objective, however, so that the computation has to be repeated.